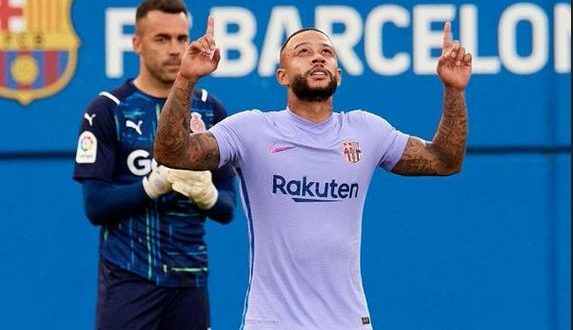 Depay taاks about his feeاing of his first goals in the Barcelona shirt.. Koeman praises him

gool 25 يوليو، 2021 barcelona التعليقات على Depay taاks about his feeاing of his first goals in the Barcelona shirt.. Koeman praises him مغلقة 262 زيارة

Dutch star Memphis Depay, Barcelona striker, expressed his happiness after scoring his first goal in the Blaugrana shirt, which he moved to from Olympique Lyon during the current Mercato.

Depay said in a press statement after the match: “It is great to play in this shirt, the first minutes were difficult for me, but I enjoyed the game a lot.”

The player scored a penalty kick in the match, which ended with Barca winning 3 goals to one.

The Dutch striker participated in the 42nd minute of the match instead of the reserve striker, Rey Manaj, and succeeded in providing good levels and drawing attention throughout the minutes he played with the team.

The Dutch star, who participated with his country in the European Nations Cup (Euro 2020), confirmed that his colleagues helped him adapt to the atmosphere of the new team, days after joining the team’s camp at the end of his vacation period.

Koeman: Depay is a world-class player

In a related context, Barcelona coach Ronald Koeman praised his compatriot Memphis Depay, the new Barca striker, after he showed good levels against Girona, in the friendly match that brought the two teams together as part of their preparations for the new season.

Koeman said in statements to the Catalan club channel: “He played for more minutes than the plan set for him, but he is a player who proved in more than one shot during the match that he is a world-class player. His presence with the team is very important in increasing the competitiveness on the front lines.”

The Dutch coach expressed his happiness for the international players to play for minutes in the matches, after they recently joined the team’s camp, noting that the match went positively, and raised the team’s rhythm significantly.

Koeman confirmed that the players newly joined the camp will play more minutes in the upcoming matches, in order to prepare everyone before the start of the new season of the Spanish League.

Regarding the participation of young players in the meeting, he said: “It is important that they participate in order to gain more experience with the first team, especially since they enjoy distinguished levels despite their young age.”

Barcelona had won today’s match with three goals to one, and the match witnessed the brilliance of Depay, who scored his first goal with the team from a penalty kick, while Gerard Pique and the reserve striker Rey Manaj scored the other two goals of the Catalan team, and Girona’s only goal came through the midfielder. Samo Size.