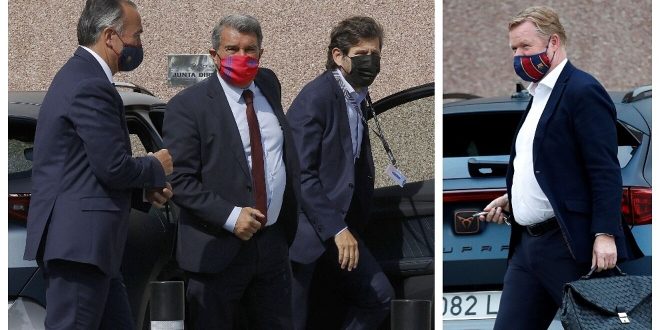 The economic crisis that Barcelona is going through prevents the request of Italian coach Ronald Koeman, coach of the Blaugrana, as the Barca coach hopes the necessity of contracting some players in the remaining days of the summer transfer market to strengthen the ranks of his battalion in the new season.

This is what the Catalan newspaper “Sport” reported, which confirmed that Koeman met with sports director Matteo Alemani, as well as technical secretary Ramon Blanes, and told them of the need to sign players in the center of the striker and midfield.

But the response of the administrative duo was clear that Barcelona at the present time cannot sign new players due to the financial crisis, and that the current list is the one who will start the season without additions.

The only case in which Barcelona can sign a player in the attacking line will be the departure of Martin Braithwaite to a Premier League club for a large sum, then the Laporta administration will have the funds to enter the market.

As for the idea of ​​contracting a player in the midfield, it seems impossible, as the current salary ceiling still threatens Memphis Depay and his catching up in Barca’s first match against Real Sociedad in the Spanish League.

At the same time, it seems that Barcelona has settled on Depay as Messi’s successor, and in his absence, the new deal for the reserve team “Youssef Demir” will be the actual alternative to the flea.

According to Sport, Koeman will pay a key player against Sociedad if Depay fails to register before Sunday’s match, to play in the position of Lionel Messi, whether he or the experienced Antoine Griezmann.

Koeman will also push the duo Gerard Pique and Ronald Araujo in the center of defense, with Dest in the right front and Jordi Alba in the left, and the surprise is his dependence on Pedri, despite the great fatigue, in the middle of the field.

Pedri will be next to the duo Sergio Busquets and Frenkie de Jong, with Antoine Griezmann, accompanied by Martin Braithwaite, in the lead, and waiting for Depay’s position to determine whether he will participate or “Messi of Austria”.

Barcelona suffers from the absence of goalkeeper Ter Stegen for injury, so Neto will be the protector of the Catalan den in front of the Anoeta team in the match that will be attended by 15,000 fans at the Camp Nou.

It is worth noting that Barcelona lost this summer the services of Lionel Messi due to his inability to renew his contract due to the financial crisis, and the offensive support of Sergio Aguero is also absent due to injury.