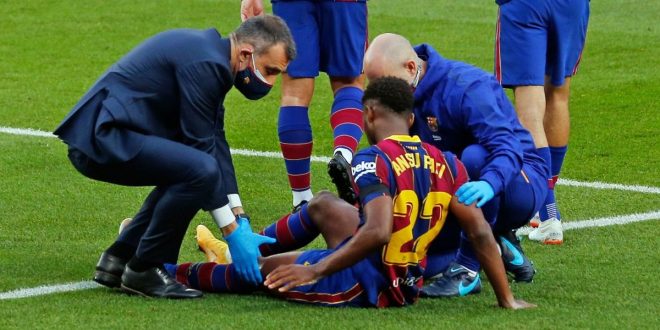 Ansu Fati, the youngest player ever to score a goal for Barcelona, ​​​​has returned to group training for the first time in more than nine months due to an injury.

Giving the number 10 shirt to Fati, is an additional pressure on the young player, and it can turn against him. A painful and incomprehensible departure for Messi.

As soon as it was known that Ansu Fati would inherit the number 10 from Leo Messi, the player’s father, Puri Fati, went to the Barcelona store to buy 8 full shirts for his son. This number is early.

With Ansu, he had to be patient in everything, he came from a grant that is not easy, it lasted for 10 months and consumed him psychologically, and Koeman said that already before his return, he emphasized that he should proceed slowly, without rushing to avoid relapse, and this gives a feeling that he With Number 10, it wasn’t necessary to run too much towards him.

The number ten in all teams is very special, and it is given to really star players, the last of them in Barcelona are Messi, Ronaldinho, Riquelme and Rivaldo, and they did not wear it on the back until they appeared clearly all over the world, Ansu is not yet and still seeks to return to the world of the round, and This number tells him that he will be the big star of the team, which is premature.

What happened gives a sense that in the Barcelona offices they need a star to cling to after two summers in which their great attacking references such as Messi, Griezmann and Suarez have departed. Messi is incomprehensible and painful.