The first expelled from Barcelona, ​​says goodbye to Xavi, wishing him "the best"
أخبار عاجلة 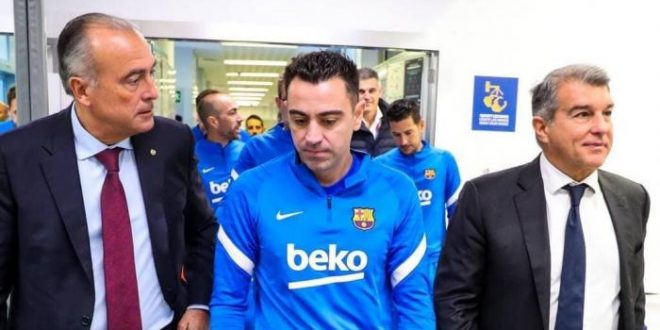 The first expelled from Barcelona, ​​says goodbye to Xavi, wishing him “the best”

Not days after Xavi Hernandez returned to his club Barcelona as a coach, changes began to appear in the technical staff of the Catalan club.

The Spanish sports newspaper “Marca” reported that the arrival of Xavi, 41, to Barcelona, ​​had a shocking impact on the team’s technical staff.

She added that Xavi is seeking to include a number of members of the coaching team, who worked alongside him in training the Qatari club Al Sadd.

Physical trainer Albert Rocca, who arrived with Ronald Koeman, is wrapping up his second stint at the club after his previous experience with Frank Rijkaard’s staff.

The arrival of Xavi Hernandez to the bench in Barcelona, ​​accompanied by his reliable crew, led to the departure of the various professionals who formed the coaching staff of Ronald Koeman, one of whom was physical coach Albert Roca, who said goodbye to the club elegantly on social media, thanking the club and wishing the new coach success.

Albert Roca wrote on Twitter: “Today is closing a sporting phase in my life, and I can only be grateful to God that I was able to live an incredible experience in the best team in the world, FC Barcelona, ​​and with these famous professionals, I take the best memories. I wish Xavi all the best in the future.”

Rocca (59), who arrived in August 2020 to be part of Ronald Koeman’s crew, is closing his second phase at the club after being part of Frank Rijkaard’s coaching staff between 2003 and 2008.