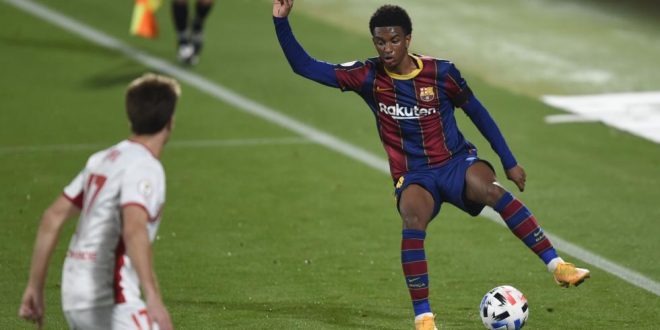 There is a second case of Elix at Camp Nou. Barcelona did not call up Alejandro Balde (10-18-2003) to start pre-season with the first team on Saturday. Baldi, who has been at La Masia Barcelona since 2011 after spending a year in Espanyol, arriving from Sant Gabriel.

He was called upon to replace Jordi Alba after Junior Firpo bid farewell to Leeds United. In fact, Barcelona dispensed with Miranda to make way for the Catalan full-back. Alex Collado, Nico Gonzalez and Alejandro Balde were the top three bets for the first team next season.

However, something has changed. As in the case of Alex Moriba, it is a contractual issue. Alejandro Balde, who was signed by super agent Jorge Mendes a few months ago, has not renewed his contract, which expires in June 2022.

As in Alex’s case, Barcelona made an offer that was rejected and the club’s plan, having decided to take this position of strength, is that Balde, like Alex, does not start pre-season with the first team to pressure him to renew as well. It will be necessary to monitor how this new club policy that began with Matteo Alemani and with the approval of President Joan Laporta operates.

Alejandro Balde is a very good full-back with good touch. Forced to improve his defensive performance, until recently he was seen as the future left-back at Barcelona. Now, as in the case of Alex, things are not clear about his future at the club.

Barcelona is suffering from a severe financial crisis and is heading to reduce the mass of salaries to reduce expenses and also to comply with the laws of the new League of La Liga, on the other hand, the club seeks to sell a large number of first-team players in addition to following the policy of free deals to support the team during the current summer, which is what has already happened in Depay, Garcia and Aguero deals.