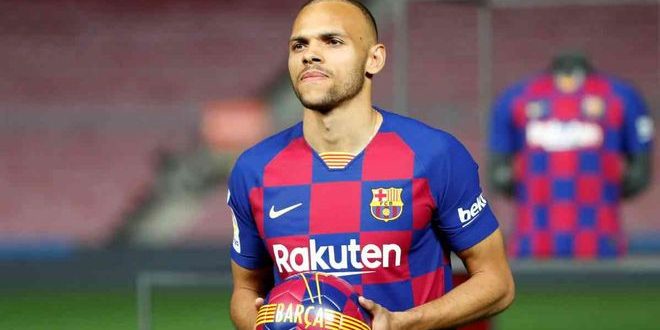 It is already clear that Barcelona will turn a profit in the next few days with the departure of its Danish striker Martin Braithwaite. The club has many offers on the table and the player has already given his consent to leave the Blaugrana, where he will be able to significantly increase his salary.

There are many offers already on the table for Braithwaite, but Barcelona are working towards obtaining around 15 million euros for a final sale, something that would go very well for the Blaugrana entity.

Barcelona’s sports department had always hoped to have an operation on Braithwaite, as the Dane already had offers in January even though he didn’t want to leave. The club waited for the striker to lift himself up during the European Championship, and he was, as he always played as a regular with the dark horse of the tournament.

At Barcelona it has always been clear that it will be feasible to recoup the investment made in buying Braithwaite and that could happen within the next week. Braithwaite had the intention of staying at Camp Nou to continue fighting for opportunities, but signings with Aguero and Memphis Depay made him understand his situation would be very complicated next season.

The Dane does his part

The Dane had a few minutes with Koeman last season due to the strikers’ injuries, but his role in the team would have changed now. Braithwaite prefers to look for luck in another team, and certainly in another league to feel important and increase his salary.

The Danish player deals with several offers from the English Premier League. In recent weeks, West Ham, Norwich and Brighton have been talked about as clubs willing to pay for his transfer. An interesting proposal was also made by Russia to both the player and Barcelona, ​​while Valencia were interested in him in Spain, although they were only in a position to offer to exchange players or get his services on loan. Everything indicates that he will go to the Premier League because negotiations are on the right track with the player.

This article has been translated from Sport