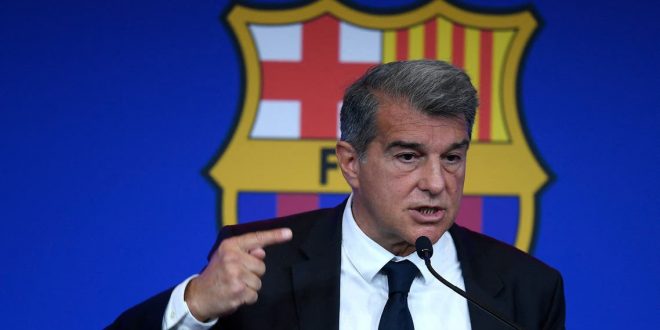 Despite the financial crisis, Barcelona seeks to end 3 new deaاs

The Laporta project, a goal to be achieved despite the financial crisis that Barcelona is going through at the present time, and the challenges facing the flute by the laws of the Spanish League, which oblige the team to reduce the high salary bill, but the Barcelona Sports District is working with the aim of contracting three other players before the end of the Mercato , Barca realizes that a revolution must be made in the team and that the arrival of a midfielder, left-back and striker will be necessary to complete the project.

The priority and challenge is to lower the wage bill over the next few days to fulfill the wishes of the Technical Secretariat and Ronald Koeman himself, who still believes there are pieces missing to make a team with full guarantees.

Both Koeman and those responsible for the sport know that it is not yet time to strike new deals because over the next week she will face the crucial stage of departures and salary cuts. The club has a very tight schedule in which it will try to give impetus to the departure of many footballers through loan or sale. There are offers on the table and what they have to do now is get the players to agree to leave the Camp Nou.

These days, four major players will also be negotiating salary cuts to balance the numbers and they hope there will be cooperation on the part of the “holy cows” in the dressing room. Barcelona has no other choice, and Leo Messi has set an example by practically cutting his salary by fifty percent to make things easier for the club.

From there, Barcelona will start working on the three new deals that should come at zero cost. Either by exchanges or by a letter of freedom. The main objective is to sign a midfielder who can cover a lot of positions. Koeman considers this deal necessary because he believes they are lacking in combat and wants the arrival of a player with international experience.

One option is Saul Niguez, who is negotiated to be included in the exchange with Atlétimo as Dredd and with Griezmann as the protagonist. The process is very complicated because of the difference in the evaluation of the players and because Barcelona will stay with Saul only if his salary is reduced. The Atlético player wants to leave the club, but he has important offers from the Premier League and doesn’t look like much due to the work of losing money in this exchange. In any case, Barcelona is considering other exchange options with the arrival of a midfielder among them and they are doable.

The team must be completed with a defender. The Sports District believes a secured centre-back would be better, but Koeman would like to sign an already more experienced left-back. The club does not close the doors to the arrival of a zone striker to complete the squad. There are very good options on the agenda and they are being evaluated, but it is impossible to pay a purchase fee, so it must be obtained on loan or for free.

A crucial week for selling is coming. If all goes according to plan, Barcelona will have enough to sign three more players and thus complete a busy summer. The negotiating efforts being made are commendable.

This article was translated from the newspaper Sport