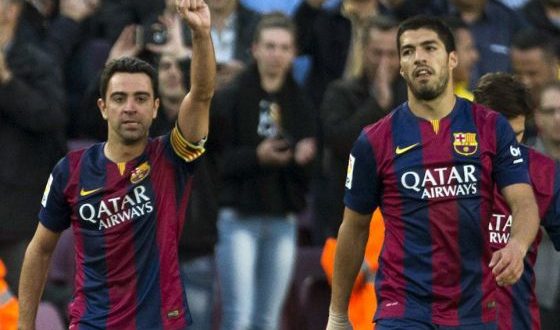 Luis Suarez, the Atletico Madrid player, sent a warning message to Xavi Hernandez from coming to lead Barcelona to succeed Ronald Koeman, and he also talked about Jaffe and Ansu Fati and the possibility of playing next to Lionel Messi in the future.

Suarez revealed the scenes of his dialogue with Ronald Koeman last year, in which he told him to leave the Catalan club.

The 34-year-old scored against Barcelona last Saturday to lead Atlético Madrid to the top of the Spanish League, shared with Real Madrid.

Suarez said in comments reported by the Spanish newspaper AS: “I saw Barcelona last Saturday as if they were without a soul. The picture alone is enough and seeing your former teammates in this way hurts me. I hope the fans have patience to correct the situation and with time they will sign players at the highest level, because it is not It’s still one of the biggest teams in the world.”

He continued, “I changed the shirt with Jaffe because he is a young player and plays well with the first teams and I needed to congratulate him for what he did, before he asked me to get my shirt and I exchanged with him.”

One of Barcelona’s top scorers throughout history talked about the possibility of Xavi Hernandez training the team, saying: “If he comes now without a clear project and a major financial crisis, he will put his legend in danger, and he also has friends in the dressing room. Nevertheless, he is one of the suitable candidates and knows everything about the team and the methods.” The best way to lead him on the right track.

And he added, speaking of Ansu Fati: “Putting pressure on a player who is still 19 years old is a big mistake, he will not be able to carry the team alone, and this needs everyone’s solidarity.”

And he concluded: “Playing again next to Messi? No one knows what might happen in the future, maybe in a year, two or three, Leo will be in a team he joined as well, everything is possible.”

It is worth noting that Joan Laporta, president of Barcelona, ​​​​reinforced confidence in Koeman and confirmed his continuation with the team.