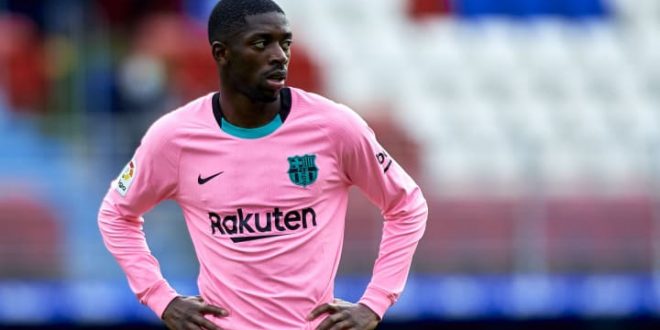 With the advent of the next winter transfer market, Barcelona striker Ousmane Dembele will be a free player who is entitled to contract with any other club, and if the French player does not renew, he will not play, and then the Blaugrana administration will make an attempt to strengthen the attack, and they will look for a loan for the Jamaican striker.

The sports administration and the technical secretariat of Barcelona never rests, since the summer market has been completed and work on possible reinforcements for the winter begins.

With Antoine Griezmann bid farewell on the last day of the market, the club has room to sign, CEO Ferran Riverter admitted, and Barcelona could sign players because it has room to incorporate players into “fair play”, although they would also like to see a footballer come out. in the next transfer window.

The Technical Secretariat believes that the team needs a midfielder with a different profile than that of Ronald Koeman, a player with greater physique than Pedri, Jaffe, De Jong and the rest, a man who complements the existing team members, a player from the profile that Wijnaldum and Alex Moreba had.

They are looking for a midfielder, but the technical secretaries are very interested in the attacking market, and this is where the names of Raheem Sterling and Ousmane Dembele come into play.

The injured Frenchman at the last European Championship is facing the final stage of his recovery, and is expected to join the group after the national team break and be able to play again at the end of the month, but everything is on hold in your contractual situation.

Dembele’s contract ends on June 30, and Barcelona offered him a renewal for weeks for three seasons, until 2025, with a salary slightly lower than it is currently. Feeling that it’s taking too long, he wants to wait and see how he comes back and January 1 arrives.”

They think that the player wants to continue, but his representative prefers to wait and play with the card of other possible offers, and Barcelona intends to be inflexible and difficult as it was already with Alex Moreba, and if Dembele does not renew he will not play, and if he decides not to extend his contract, he will try to sell him in the winter to get some money.

And here opens the door for Sterling to arrive this winter. If Dembele leaves or does not renew, the club considers that the attack must be strengthened with an unbalanced player, of the same level as the French.

Matteo Alemani was already in contact with Manchester City in the summer, as he was interested in Sterling and some other players, and the contacts continued, taking advantage of the good relationship between the clubs.

Pep Guardiola, the English club’s coach, will not see badly the player’s departure, and it seems that the striker, who does not want to renew his contract, which expires in 2023, is pleased with the possibility of playing with Barcelona.

The Catalan club would prefer, if possible, the player’s arrival on loan with a mandatory purchase option for the summer, however, at the moment, they are waiting for a response from Dembele that could clarify the panoramic picture of the Koeman team’s attack.