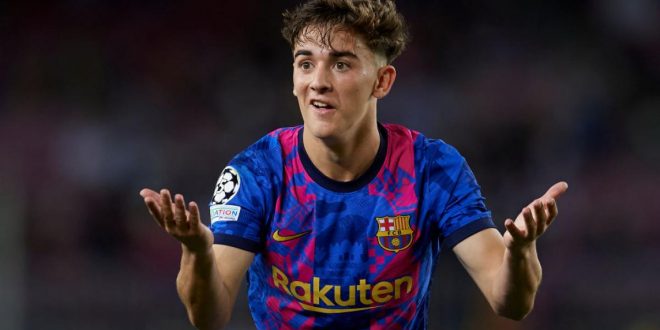 Chelsea are trying to deal a painful blow to its Spanish counterpart, Barcelona, ​​over the jewel of the 17-year-old Catalan team.

According to the English newspaper, The Sun, Jaffe is particularly admired by Chelsea owner Roman Abramovich, and as a result there will be serious attempts to bring him to Stamford Bridge and the promising project there with coach Thomas Tuchel.

The promising young player Gavi’s contract with Barcelona will expire in 2023, amid interest from the Catalan administration to renew the 17-year-old’s stay at the Camp Nou for a longer period with a doubling of his salary.

And the English newspaper indicated that Chelsea are willing to pay 50 million pounds to Barcelona to accept Jaffe’s departure next summer.

The newspaper confirmed that Jaffe’s salary with the Blues, if he joins, will exceed what is offered to him from Barcelona, ​​​​which represents a great temptation for him to reach the English Premier League.

Despite this, Mundo Deportivo reported that the renewal negotiations between Barcelona and Javi are going in a very positive way, and the agreement between the two parties that the player will continue until 2026 at the Camp Nou is imminent.

She said that the reason for the ease of negotiations between the two parties is that Jaffe sees himself only in Barcelona, ​​​​and plans to play an important role in the club’s project in the coming years, regardless of any other temptations he may receive from the huge European clubs.

The Barcelona administration is seeking to secure Jaffe by placing an exceptional penalty clause in his contract of up to one billion euros, just as was the case with Ansu Fati and Pedri.