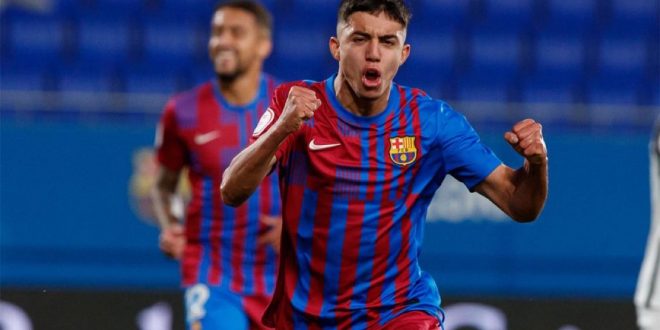 A wave of anger among the fans of the Spanish team Barcelona has erupted at the management of the Catalan club through social networking sites.

The fans denounced the bad situation in which the electronic board appeared in the “New Camp” stadium, during the “derby” match between Barcelona and its guest Espanyol in the 14th round of the “La Liga”.

The fans were surprised after the image of Moroccan Elias Akhmash was omitted in the painting, during the presentation of the “Barcelona” players, as he contented himself during his presentation by showing his name and number only and adopting a black space instead of his image, unlike the rest of the team’s players.

The fans wondered why the club did not provide a picture of Akhomach, even though he is one of the club’s players and has been in La Masia for years.

Moroccan Akhomach played his first match with Barcelona’s first football team under the leadership of coach Xavi against Espanyol, in which he made a more than wonderful start that was appreciated by his coach.

It is worth noting that Akhmash missed Barcelona’s match against Benfica in the fifth round of the Champions League, because he was not registered in the European list.
Barcelona’s management angers its fans because of the team’s jewel Akhmash